Upper Zingzing Bar to Sarchu via Baralacha-la (53 km)
Last night, the sky was impeccably clear and we could see many stars. Signs of good weather. However, I couldn't sleep properly, guess it was because of the thin air and the altitude and also since our tents were near the road. I could hear vehicles passing by throught the night. Thankfully, I was feeling fresh in the morning. We had to climb the famous Baralacha-la today. The climb started right as we left camp. The climb is gradual and not daunting as I had imagined. The condition of the road was again very bad, but the surroundings around us were were extremely beautiful. The stark, bare mountains covered with snow from the previous winter, winding road, small streams; it all looked so beautiful. 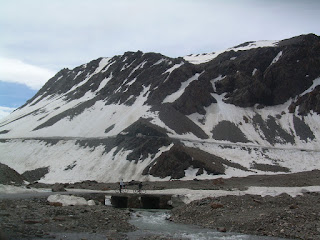 We were riding along the Bhaga river. Suraj Taal, where the Bhaga river supposedly originates, was around 10km from our campsite and it was a gain of around 400mts. Suraj Taal is another beautiful lake. We spent sometime here and headed towards Baralacha-la (16200 ft) which is very close from the lake. 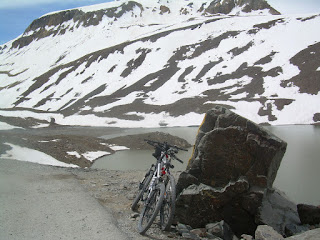 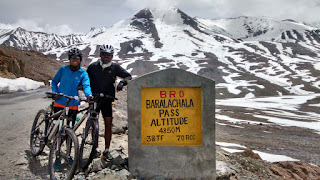 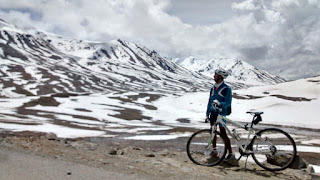 After Baralacha-la, it was all the way down till Bharatpur. The descending was again on broken roads where snow from the winters was melting continuously and we had to wade through water at few places. 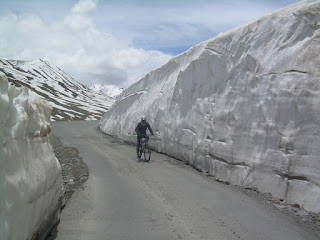 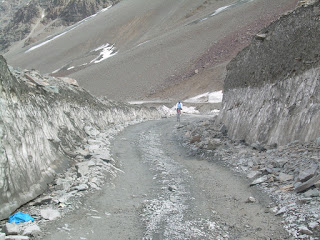 We had a quick tea and started for Sarchu. The ride was through some dusty roads initally but after riding around 10km, the condition of the road improved and the surroundings too changed magically. We realized that from here on, the setting would be Laddakh like. The mountains were still barren, but had magically changed color. 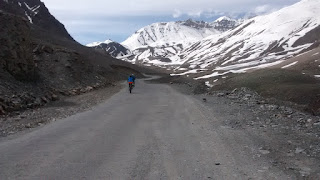 The last few kms was the most beautiful stretch of the trip till now. Flat roads,tail winds,good roads and beautiful mountains around. We reached Sarchu around 2:30 PM. Our campsite was couple kms ahead of the town. There is military base here and you can use the phone they have to call up. As it cleared in the afternoon, we could see a beautiful double rainbow. I have never seen something like this before. 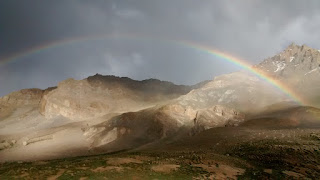 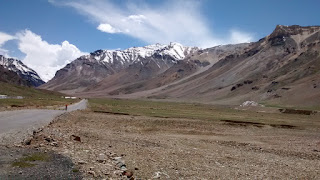 Sarchu to Whisky Nala via Gaata Loops and Nakee La (49 km)
It was going to be another tough day today. The initail stretch of around 20 odd kms was rolling amidst beautiful surroundings till we reached base of the Gaata loops. 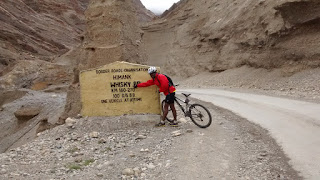 Gaata loops is a set of 21 hairpin bends and some say it is the Alpe d'Huez of Manali-Leh highway. The climb is around around 11kms. The traffic on this route was really bad and road too is in a bad state. Soon I reached the place where you offer a water bottle to the “Ghost of Gaata Loops”. 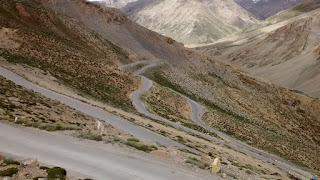 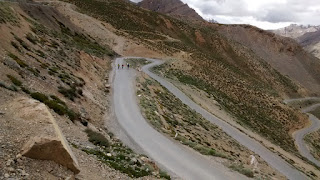 The climb did not seem very daunting and we reached the top in little more than an hour. But the job was half done. We had another pass called Nakee La (15547 ft) to climb. The altitude was killing and I guess we were tired as well as it took more than 2 hours to cover the climb of 8kms. I had to take a break after every half a km. 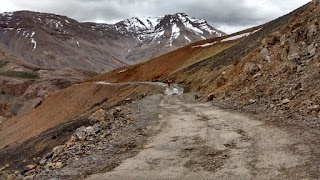 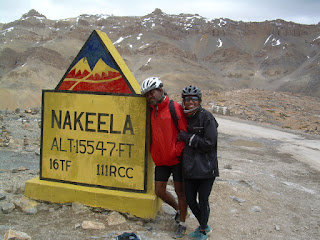 Our support vehicle was waiting at the pass.We started our descent and the ride was bone shattering. Finally we reached the camp at Whiskey Nala at around 1:30 PM. We had trouble pitching tents even during this time as it was very cold.

Whisky Nala to Debring via Lachung La and Morey Plains (78 km)
It was another great day for touring the mountains. We had to cross another high point, the Lachung La pass today. We started after breakfast at around 7:45, the climb to Lachung La (16616 ft) was around 6 km and then it was around 24km downhill till Pang. 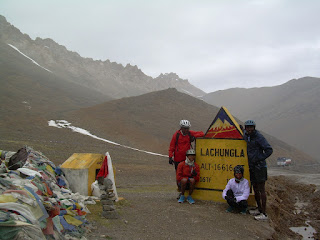 The route was very beautiful and scenic after the pass. The surroundings looked like they were carved out of sand and placed here. It was drizzling a little as we descended, but it looked like this region was deprived of rain. 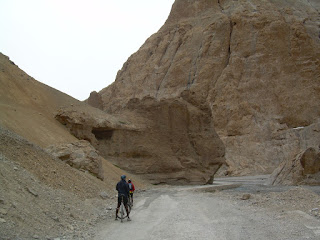 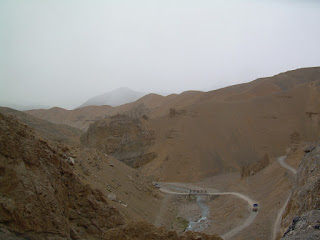 There is a large army base at Pang. We stopped at Pang for an hour and started the climb for Morey Plains and I was looking forward to riding in the Morey Plains. Once we reached the start of the Morey Plains, the rain Gods played spoil sport and all the grand views were gone. There were dark clouds all around and the famed views were not to be seen. 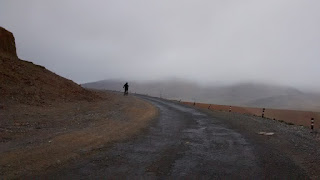 The almost flat road in the plains goes on for around 35km and for a change felt almost like a formula one track. I missed my road bike here. 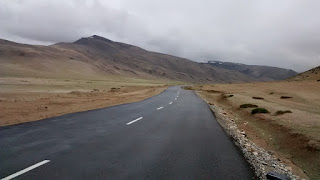 We passed the detour to Tso Kar and I remembered, while planning for the trip, I had discussed with Sandeep on taking a detour here. But since we were short on time, we had decided to give Tso Kar a miss. We finally reached our destination, Debring at around 3:30 PM. It continued to rain throughout the evening and we do not have any other option but to stay in our tents.

Debring to Lato via Tanglang La (55 km)
Since it was raining in the morning, we decided to start a little late and eventually started at around 8:30 AM. The highest point on the trip is Tanglang La (17582 ft) which is a climb of around 25km from Debring. The initial 3-4km were easy rolling, however the road was becoming worse as we climbed up. At one point it was but a muddy trail that we had to negotiate. These bad roads coupled with the altitude was making the progress slower. Also, we could see that there had been a fresh snow fall on all the surrounding peaks. At one point, we had to stop and make way for a long army truck caravan that was going towards Leh. We were making steady progress and were stopping frequently to take pics. 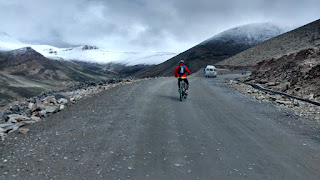 After around 15kmt he condition of the road much better and infact was good till towards the end. The last 6 kms of the climb were really killing. 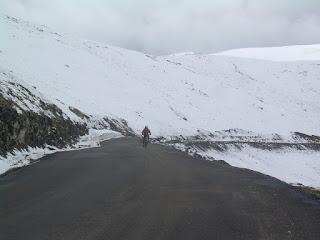 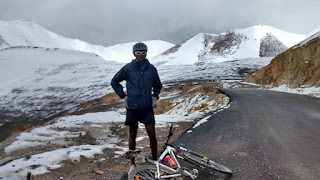 John and I were riding together and Sandeep was a little behind us. The altitude was taking its toll and were taking break almost every km. After the final section of climb, John said he could see prayer flags and I was so relived. We were about 500mts away from the pass as we waited for Sandeep and three of us reached the pass at around 12:30 PM. 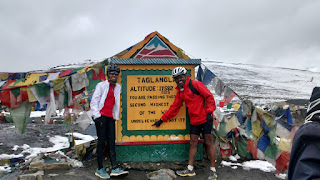 What a feeling it was. The others joined us in some time and we were all feeling very elated. The weather was holding and we got great views all around. But as they say about the weather in the mountains, the fickle nature that it has , it started snowing and we had to we wait for snow to stop before we started our way down. It is one of the best downhills that I have ridden. 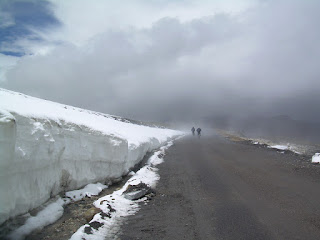 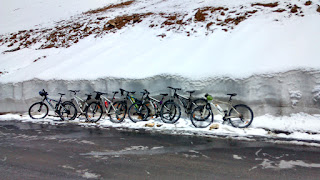 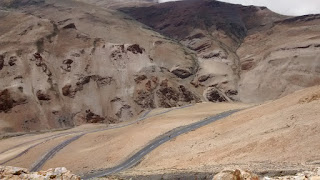 It was all the way down from here till as we came to Rumtse, one of the first real village we had seen in a long time. Also it was good to see some green after seeing a lot of brown, white and gray, after a long time. We stopped at Rumtse for some time and then continued to the next village of Lato which was where we set up camp. 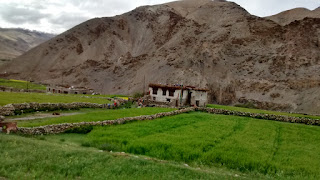 Lato to Leh (75 km )
The last day of a trek or ride is always a little sad. You have mixed feelings. On the one hand, you have the joy of completing it safely, but on the other you also know that it is time to get back to civilization and work and emails and pollution and traffic and all those things that we cannot live without. It was a long ride today but was an easy stroll compared to the climbs we had done earlier. We did get our first puncture (on the ride) today. 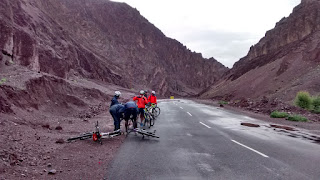 We were finally riding along the Indus as we came near Shey and the Thiksay. Slowly, the familiar sites of Leh started emerging as I realized that the journey was coming to an end. 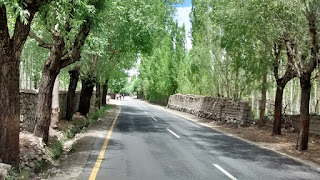 Looking back
This was one heck of a trip and I am so happy that I was able to do it. The company of friends makes the trip more memorable and this was the case in this trip as well. I will definitely do it again sometime.
I know the Manali-Leh cycling trip is on the "bike-it" list of many a cyclist so here are my two cents. We did not engage any "agency" for this trip. We organized this trip as a group. The road conditions, weather, time taken each day etc should be taken as a reference only as they may vary for you. Note that this kind of trip is not without its risks. There is always the risk of bad traffic, bad weather and above all the risks of high altitude. You will need to be cautious and careful. Having said this, I say again, this is one heck of a road trip and I am sure you will enjoy it.

"May your trails be crooked, winding, dangerous, leading to the most amazing view. May your mountains rise into and above the clouds" - Edward Abbey