Sandeep and I have been trekking in the Indian Himalayas since almost the past10 years. However,if someone were to asks us about treks in our own backyard of Western Ghats, then sadly, we haven’t done many.

We did try Tadiyendamol few years back but due to heavy rains we couldn’t complete the trek. Another reason for aborting the trek earlier was we were ill-prepared for the trek assuming (wrongly) it should be very easily doable. How wrong we were.
Now in 2017, this was a long weekend in the first week of October and we thought we should start exploring the Western Ghats as well. Few of our friends also agreed to join us.
After researching a few treks, we zeroed down on the “Tadiyandamol” again but this time decided to go with proper gear.

Tadiyandamol is the highest peak in Coorg/Kodagu district with an elevation of 5740 ft. The trail takes you through the vast expanse of the shola forests, through endless lush green grasslands and streams.  Although technically a very easy hike, the elements can make this day hike challenging. 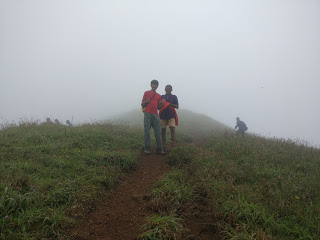 Since we were a big team of 12 members, we decided to hire a tempo traveler from Bangalore. Since Sandeep’s parents were also accompanying us, we were looking for some comfortable place near the base of trek so that they could stay there while we trek.
We talked to a friend and he suggested a homestay called “Papera”. It was around 5-6km from base of the trek.
We started from Bangalore around 1AM so that we could reach early morning at the homestay. The journey was eventless till early in the morning when we found ourselves in the midst of a grand Dussera procession. It was great to see all the folks in and around the town get together and enjoy the festival. They were dancing, enjoying themselves and having a great time. 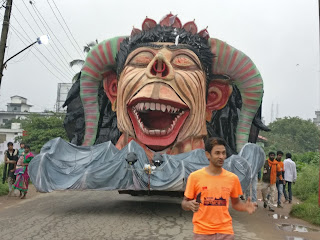 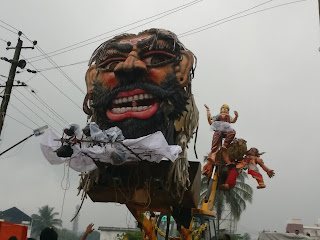 Once we reached Papera our homestay, we were greeted by Rajesh and his family members.  The homestay itself is set in a large coffee estate. After a sumptuous breakfast, we started for the base of the trek. Rajesh, in his jeep dropped us at Nalknad Palace, which is at the base. This palace was the refuge of the last Haleri kings of Kodagu, mainly Chikka Veerarajendra before he was deposed by the British. 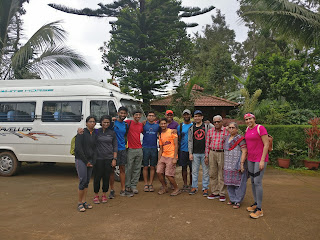 Team before starting the Trek 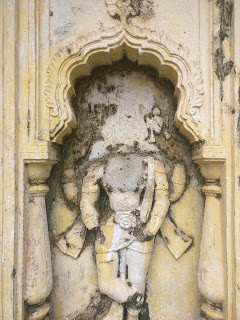 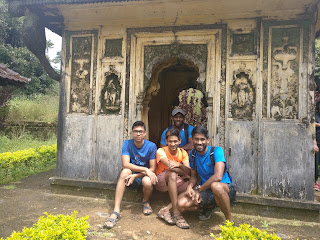 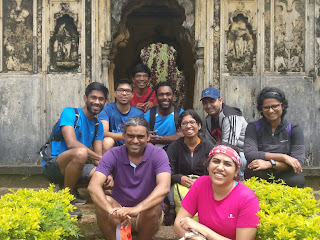 Nalknad Palace
The trek starts from the palace. However Rajesh suggested that since the first couple of kms  can be covered by jeep, we should take a jeep ride and start the trek from the check post. Earlier we were little hesitant because we wanted to trek the entire distance but we went on with his suggestion.
There is a check post where we had to pay a nominal forest entry fee. The weather was pleasant and we thought we would complete the trek comfortably if the weather stays put. We started on the mud path that was self-guiding and climbing with an easy gradient. This stretch with easy gradient was the longest and lasted for a while. It was exciting walk as we repeatedly entered and exited the forest cover and open grasslands without getting even slightly tired. All of us were chatting,laughing as we aambled on over the trail. The surroundings were all lush green. Due to heavy rains , small creeks had formed and there were mud puddles, all of which we negotiated without getting our shoes dirty. 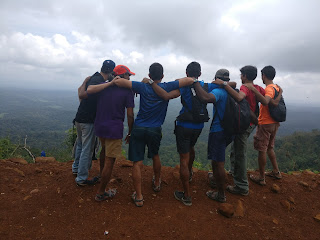 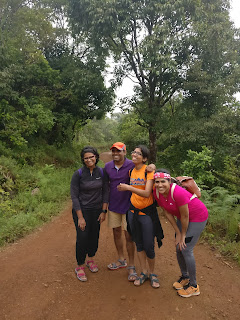 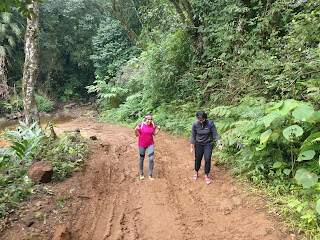 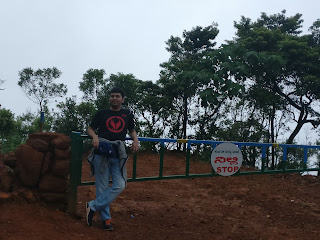 At around the halfway mark (distance wise and not time wise), there is an open ground with a big rock. This is where we took a short break. Earlier folks used to camp here as the top of the peak cannot accommodate more than 4-5 tents and the weather may not be favorable to camp there because of strong winds. However, no camping is allowed anytime on the trek now.

It started drizzling after we started from this place and all of us got our ponchos and other rain gear from the bags. The well-marked trail slowly started climbing up although the gradient was still very gradual. All the team members were quite fit and none of us felt any fatigue throughout. After a while, we reached a section where we had to climb through the thick growth of trees.  This was the entrance to a small wooded section on this trail.  Steep steps had formed with the roots of the huge trees and It was all muddy with lot of small stones and gravel. I remember last time we had to turn back from the same point due to heavy rains. 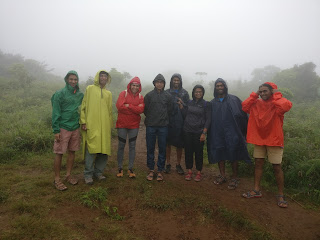 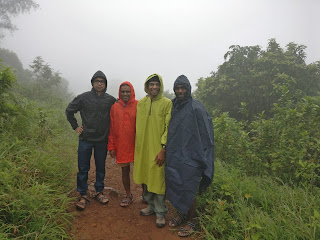 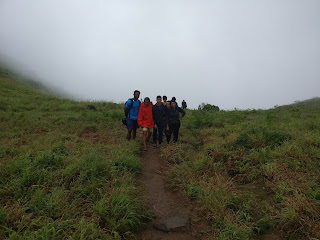 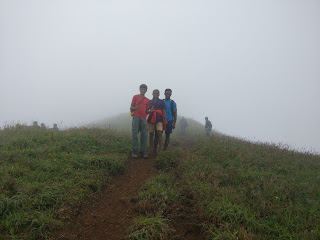 Once we climbed further and exited the thick wooded growth, the peak was visible. This being a long weekend, a lot of folks were on the trail and some of the narrower sections were getting crowded. The last section of the trek is a nice clime with a slightly higher gradient and was itself very narrow. There was huge traffic jam just below the peak and someone jokingly said that this is what the famous “Hillary step” would be like in the climbing season.

We finally reached the top of the peak after walking for around 2 hours. Of course there were no views as there was a thick blanket of mist all around the peak. The views would have been grand if the sky were clear. We spent some time here, clicked the customary pictures with selfies and “Titanic poses” , had some snacks and started for our way down. 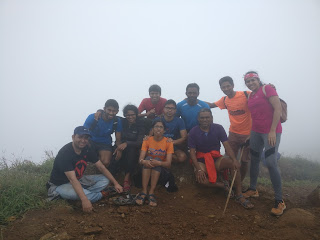 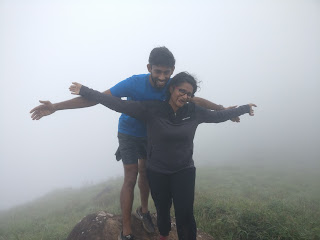 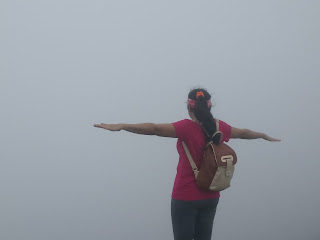 Immediately as we began our climb down, it started pouring heavily. All of us had to put on our ponchos again and began our descent. We had to be extremely careful now as the stones on the trail were getting slippery.  The group was divided in to multiple sub-groups. One sub-group was ahead of me and one was behind. I was the only one in my group and enjoying my solitary walk in the downpour which had now become very heavy. There was the occasional thunder in between and I was taking  each step very carefully with a feeling of great contentment.
The walk down was slow and steady with almost no visibility as the rains lashed against my face. All of us took almost the same time to get down as we had taken for the climb.

When we finally finished the climb down, I was happy and elated that we were  able to complete the trek without any incidences.

Rajesh was waiting for us at the check post. We were hungry but Rajesh had different plans for us. We boarded the jeep again and started off towards the base. The off-road ride downhill in the rains was both very scary and very adventurous. After a short drive, Rajesh took us to a small hill near “Chelavara Falls”.  This was where he was planning to take us off-roading in his 4X4 Mahindra Utility. And boy, what a ride this was. This was by far the greatest experience for me in a 4 wheeler.
For the entire distance we were all shouting and screaming like going on a roller-coaster, except it was much more thrilling.  The off-road drive,after the trek,  was the highlight of the trip for us.

Finally after a heck of an adventure, we reached a plane ground where he served us lunch. It was a sumptuous feast for both vegetarians and non-vegetarians amongst us.  Not surprisingly, the food tasted more delicious what with all the climbing and off-roading we had done. 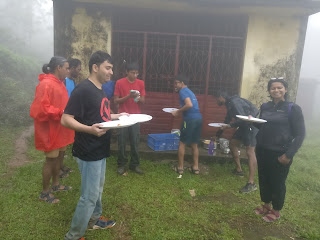 After all the thrilling escapades, we finally reached the homestay at around 6 in the evening. What a day it had been and all of us just could not stop talking about it as we huddled together for tea/coffee and snacks.

The next morning we went around for a walk and then again took a jeep ride to a small waterfall. The adventure just did not seem to be ending. 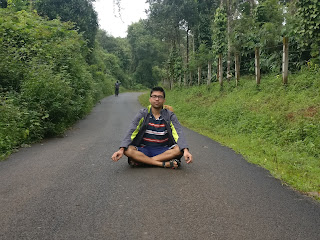 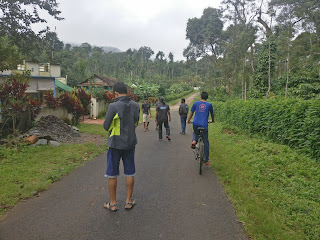 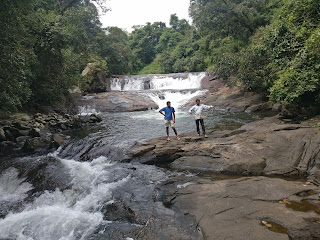 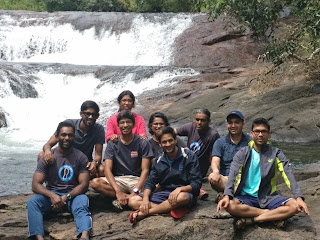 I have visited many resorts/home stays in south India but Papera will remain special. The warmth and hospitality which Rajesh, Tanjua and their family members showered on us cannot be described in words. These guys are an amazing host.

More information about the home stay can be found at http://papera.in/.

This was my first trek in Karnataka and I must say I am hooked on to it. The company of my friends Brijesh, Dilip, Deepti, Avinesh, Mukta, Paripurna, Sumukh, Naidu and Sandeep made the memories of the trip unforgettable. 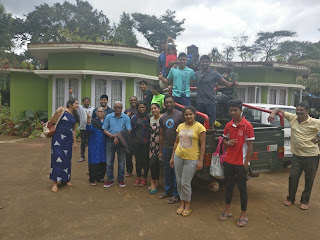 As they say, memories made in the mountains stay in the heart forever and so will the memories of this trip remain. Looking forward to many more such trips in the Western Ghats.

Maza aa gaya padh ke.. If someone has to remember the trip more than pics they should read this blog:)

The memories are jotted down so beautifully. Truly memorable trip. Thanks for making me a part of this.

Beautiful write up Shipa... It was an amazing trip and wonderful experience of hospitality of Rajesh and his whole family at Papera home stay !!

Thank you Shilpa for giving Papera a spot in your write up! Glad you had a good time and will look forward to host you and your entire team yet again. You guys have been a wonderful team to host :)