The greatest gift of life on the mountain is time. Time to think or not think, read or not read, scribble or not scribble -- to sleep and cook and walk in the woods, to sit and stare at the shapes of the hills. I produce nothing but words; I consume nothing but food, a little propane, a little firewood. By being utterly useless in the calculations of the culture at large I become useful, at last, to myself.”

I read the lines above sometime back. And after every Himalayan sojourn, I feel how true that feeling is.

The planning of many of our adventure trips has always been incidental and slightly random. The plans for this winter trek were getting formed during a relaxed and rainy September weekend,   when Sandeep and I were at Dilip and Deepti’s place. There were sundry discussions mostly around running the Delhi marathon, when suddenly I had a thought: What if we go for a winter trek after the run. Little did we know then that we would actually do it and would turn out to be so much of a fun trip.
Sandeep and I have visited Ved’s place quite a few times during the past year and we really like the quaint Himalayan village. During one such visits, he mentioned the Tirthan valley and a relatively unknown hike (at least in the trekking community) called the “Lama Lambri pass trek” which can also be done in winter. 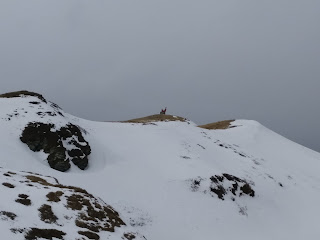 Himalayan treks which are touted as easy in summers, turn into moderate to challenging hikes during the winters. The barren surroundings, unpredictable weather in form of snow and wind, the discomfort due to cold,  all add to the challenges . That’s why winter treks have their own charm for me. 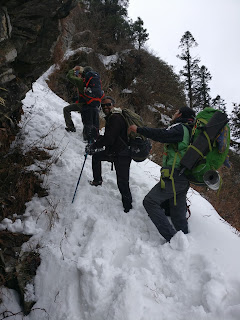 Lama Lambri pass is unquestionably and truly a beautiful trek. One moment you are trudging through thick pine forest and the next you are amidst oak forest where the trees are laden with luxurious moss.  Sometimes you amble your way across meadows ( which I am sure would be lush green in the summers ) where surprisingly you find a small semi-frozen lake and then again you are doing some hard climbs where you try hard to catch your breath and as you reach the top, you are greeted with beautiful views of  snow clad peaks across the valley. 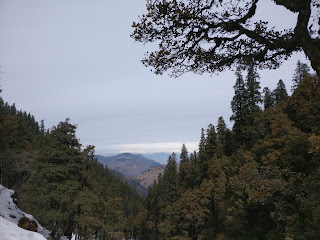 After the Delhi run, we reached Ved’s place near Shoja in the morning. Since everyone had raced hard the previous day, we decided to rest and recover and start the trek next day. We spent time strolling around on the road towards Jalori pass, eating delicious food and enjoying the fresh air. The next day all the members and support staff got ready by 9:30 in the morning.  The plan was to drive for a couple of hours till a small settlement of “Deemachari” and then start the hike from there. The drive into the valley of  “Gada Ghusheni” was eventless but quite scenic. We gained some altitude as we passed by some quaint settlements as we reached the settlement of “Deemachari”. 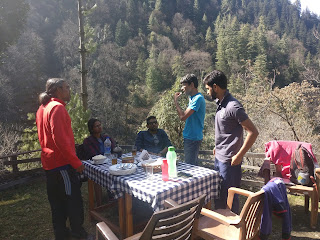 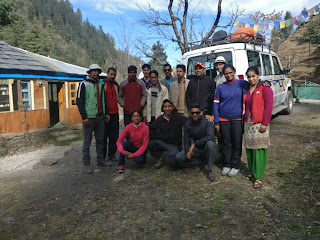 The initial walk was through thick pine forest on a well-marked trail. The locals had been saying that the amount of snowfall had been relatively very low during the season, so we were not expecting to walk on snow on the first day. However, we did see a lot of patches of snow all around. At some places the canopy was quite dense and there was very little sun even in the afternoon. There was a lot of hard ice on the trail at all such places. The trail, which was along a small stream, started to gradually climb up. This being the first day, we were all in high spirits, enjoying the surroundings, chatting and in all this we never realized how easily we did the five to six kilometers of walking and reached the camp. 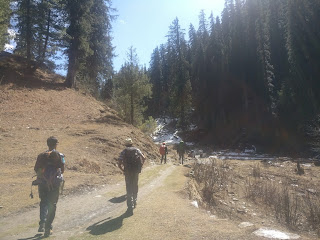 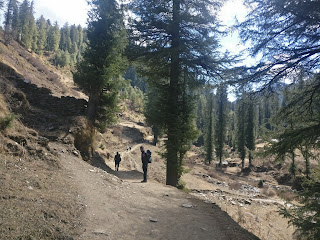 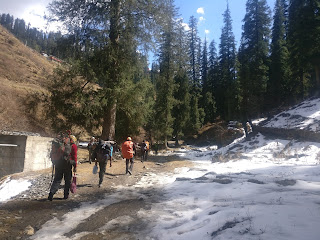 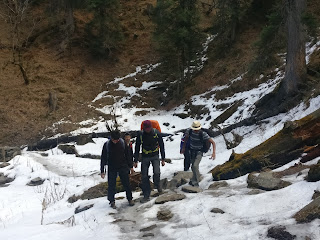 We pitched our tents and soaked in the nature around us. We had camped a little away from the trail, amidst tall pine trees, at foot of a slope where a lot of snow had accumulated. As the evening progressed, the sky became clearer and we could see the stars. It was also a day before the full moon and the whole area was awash with soft moonlight. This is what I like most on the treks. There is so much time in the evening for doing nothing. 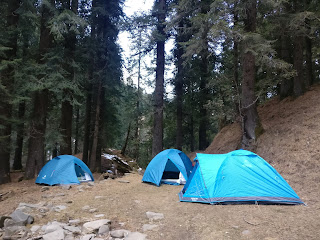 This is not a fixed campsite and hence there is no name for this site. After coming back to Bangalore when I asked Ved about the name of the campsite for my blog,  he said, “You are the reason for me to plan this route and because of you we camped here. So I have named it “Shilpa Thatch”.  What a compliment I got and it made my day.

The next day was another beautiful day of the trek. As we started climbing on a gentle slope, we started to encounter a lot more snow on the trail. We started walking up a nallah which was running dry and the sun was not fully up, so the snow was hard too. We were following Ved’s footprint on the snow. The initial walk amongst pine slowly gave way to a thick oak forest. 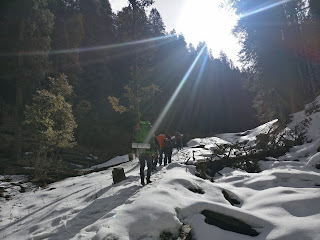 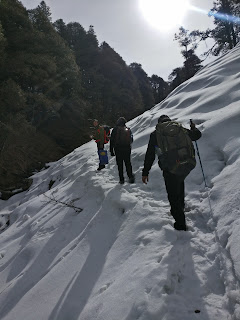 We spent some time at a small meadow after climbing up the slope, when Ved said that we have to climb up a little more. The plan was to have lunch at “Raghupur Fort”. On the way to Raghupur fort, we found one small lake which was partially frozen. The climb to Raghupur fort was gradual as we left the oak forest behind. Raghupur Fort is a historic place which is believed to be built by Kullu or Mandi rulers. However, today there is nothing much left of the fort except the outer portion of the walls and a small moat. 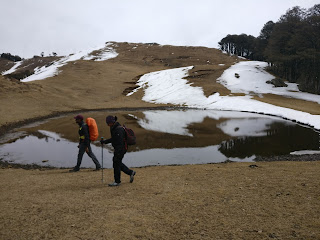 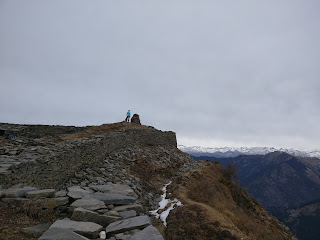 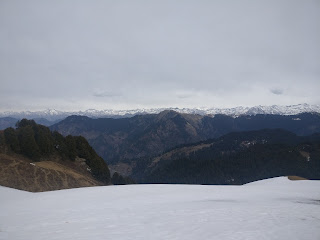 We spent some time at the Fort where we had our lunch and descended again through oak and rhododendron  forest to reach “Jalori Pass”. Jalori pass is a motorable pass connecting the Kullu and Shimla regions. Since Deepti had some issues with her shoes, Ved arranged for another pair of shoes for her which we collected at Jalori pass. Our home for tonight was the Serolsar lake. It is an easy and nice walk to Serolsar lake from Jalori pass on a well-marked trail. 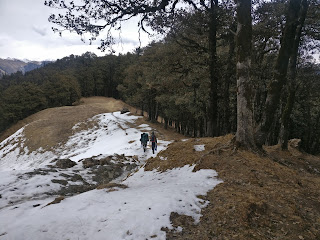 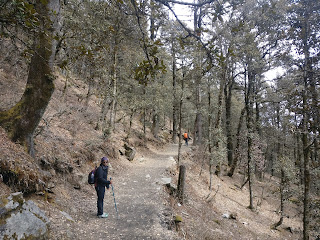 As we reached the campsite, we noticed that there was lot of snow around. We set up camp at a small clearing near the lake. The place also has a small dhaba which serves some basic food. There is a temple next to the lake called the “Budhi Nagin Temple”. 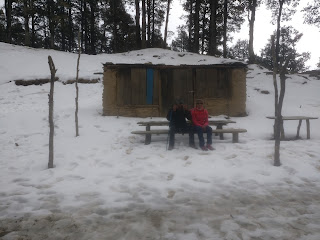 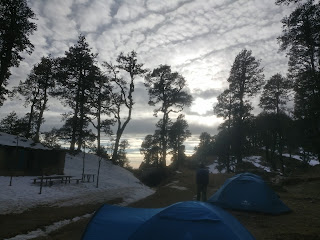 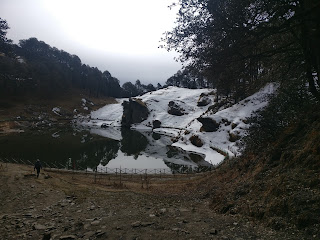 The mountains look very different in the Himalayas on a full moon night. Today was the auspicious festival of “Holi Poornima”  and we , we were lucky to witness the pristine surroundings in the light of the full moon.